What happens when you put a traveler who is always hungry, smack-dab in the middle of one of the foodie capitals of the world? Magic.

Before jetting off on a two week holiday to the Philippines, my partner and I spent last Christmas in Kuala Lumpur, Malaysia with my parents and a few friends who live in KL. Because of the sheer number of places we tested in foodie-centric KL, this post is dedicated to the nibbles and bites you can munch your way through in Kuala Lumpur’s Chinatown, including the famous Petaling Street and surrounding area.

Stepping onto Petaling Street is a sensory overload, with vendors selling durian, rambutan, and other beautiful and lush Southeast Asian fruits, while hawkers fry up hot flashes of stir fried flat rice noodles in fiery woks next to groups of relaxed locals munching on roasted Chinese chestnuts and gulping down ice-cold Carlsberg beer. 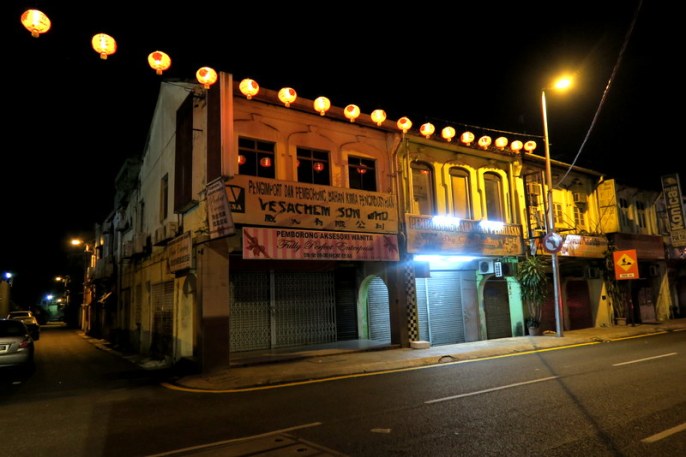 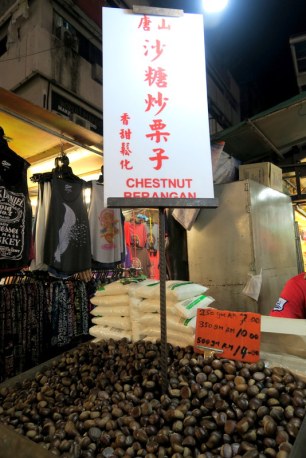 These stir-fried flat rice noodles with pork, chicken, prawns and vegetables (or any combination of meat and vegetables really) are a staple across Southeast Asia, but traditional kwetiau is said to stem from Penang, Malaysia’s foodie capital (quite possibly the world’s, if you believe this post).  Having grown up in Indonesia, I have had many varieties of kwetiau throughout my life, but I must say that the one served in Chinatown at 2 am on a random Monday evening in December was one of the best. 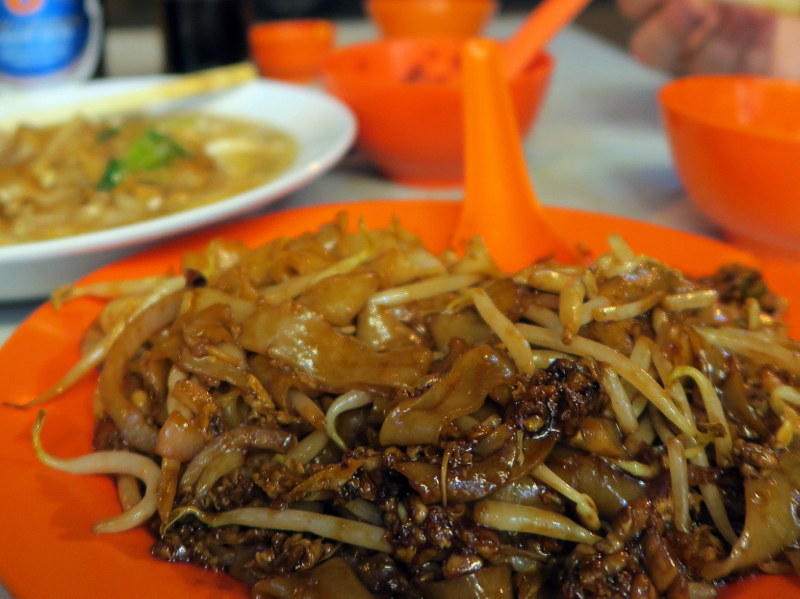 Whether this was the deep and almost sensual charcoal flavour from the well-seasoned and overused wok, or the beer and giddiness of sitting by the side of the road at an hour where most people’s minds are in la-la-land (in whichever context you wish to imagine this), the noodles married beautifully with the pork, chicken and prawns, and I slurped up each and every bite.

So I’m obviously a noodle fan, and this was the first time I tried Cantonese kwetiau, which is a bit like a soupy version of the fried kwetiau. I ate some of it because, well, I take my duties as The Tasty Traveller very seriously, but I simply couldn’t finish the noodle-based concoction as it felt way too slimy and wet for my liking (and not in the good way). The seafood was good, the noodles themselves were good, but when mixed together it just all became a bit strange.

Hokkien noodles stir-fried in an open fire work with thick, sweet soy sauce, prawns, pork fat and chilli reminded me a bit of char kwetiau, but a much gooier, sweetly condensed version. I had read a lot about this dish before our first nibble on Petaling Street, and to be honest, my initial reaction was not what I expected. The first bite knocked me back with overwhelming sweetness, but as the pork fat rendered with the chilli, it all started to come together quite nicely and before I knew it I was halfway through the dish.

Perfect with beer (like most of the dishes I had in Chinatown). 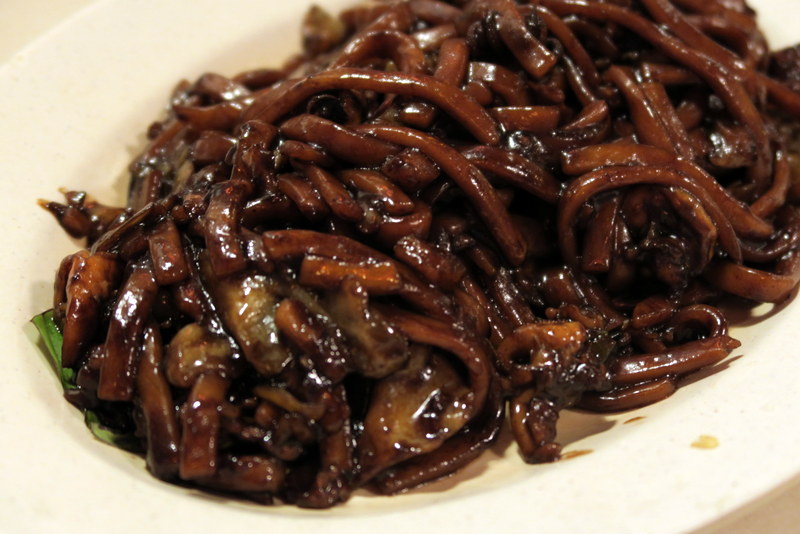 Anyone who has traveled or lived in Southeast Asia will be very familiar with durian. And whether you are a hater or a lover of this infamous fruit, you will, undoubtedly have formed some kind of opinion in regards to the smelliest fruit in the world. The skin of the fruit is very much like jackfruit (spiky and thick), but as opposed to it’s less volatile cousin, durian has an odour which can be compared to slowly rotting cheese, or volcanic lava. 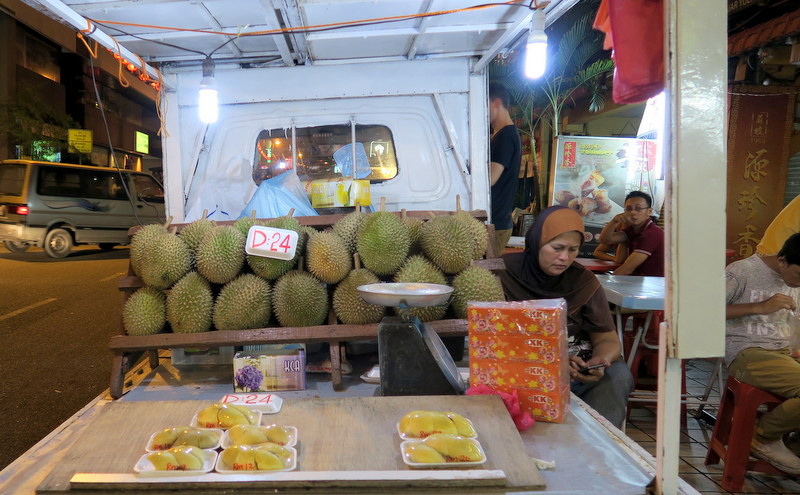 Due to the nature of this widely celebrated fruit, durian is banned on airplanes, in hotels, at restaurants, and in most public places. But if you can get over the initial stink, and let yourself have a bite of the gooey, mushy insides, you will be rewarded with a sweet, almost vanilla like flavour, which will surprise and delight you, and quickly turn you from a potential durian-hater to lover.

It’s common knowledge that the Chinese do pork, and they do it well. Whether it’s ground and mixed inside of beautiful dumplings with chicken broth (like xiao long bao), or simply crisped up over a barbecue, when I eat Chinese food, I always make sure that I order something that oinked in its previous life. 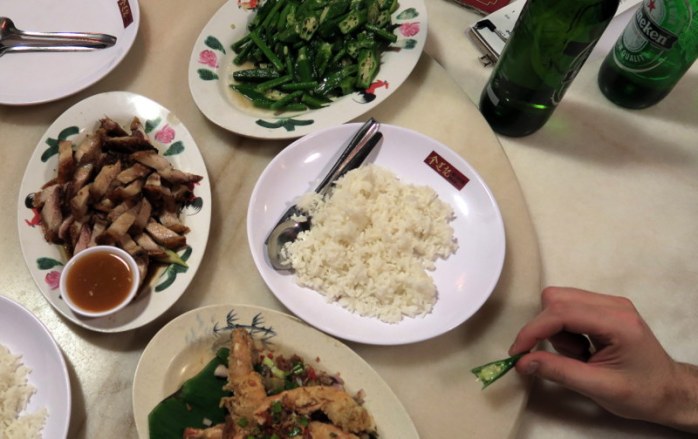 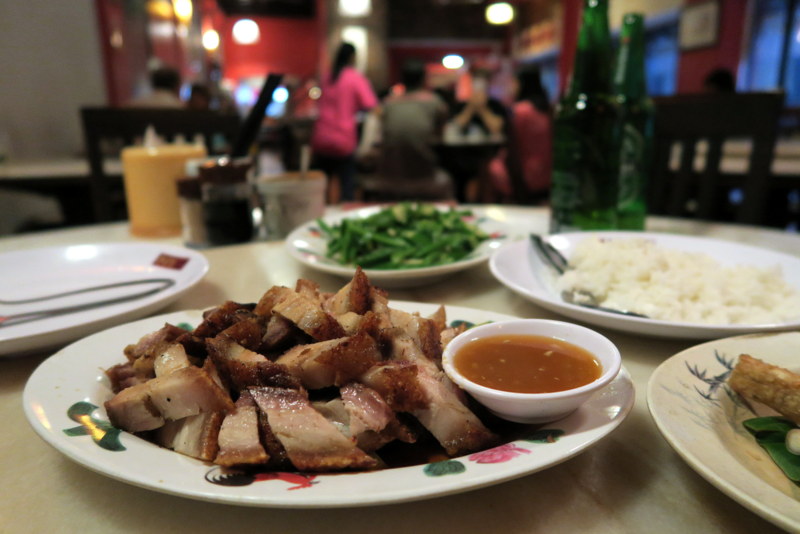 Crispy roast pork belly combines the subtle flavours of pork with  a soft (fat) and crunchy (skin) finish, making your mouth explode in pork-induced fireworks. Served with chilli, soy and rice, this is one of my favourite dishes on earth! Whether it’s served in the Chinese way (as above) or in the Danish way (just the pork meat, fat and crackling with potatoes and gravy), the combination of several parts of pig in your mouth at once is mind-blowing.

Other honourable mentions for eats in KL’s Chinatown (and this list isn’t exhaustive) are:

We arrived in Malaysia with bellies rumbling in excitement, and after several days of feasting on local delights we left the country with bellies purring in pleasure. Look out for an upcoming post on the other foodie delights we ate our way through in Kuala Lumpur!